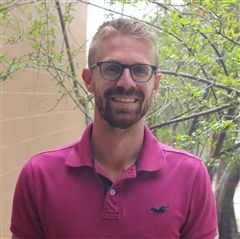 7/1/2021
by Charles Elliott, class of 2023
One of the many goals at Pusch Ridge Christian Academy is to cultivate a tightly-knit community by providing opportunities to partake in various activities providing unity of believers in Christ. The Pusch Ridge cross country team, which meets almost every weekday from August to November, is one of these activities that generates an atmosphere touching far deeper than simply running. Head coach and HS Bible Teacher Mr. Mike DeAlto provides a peek into his personal life and how it correlates with the cross country team and the Pusch Ridge mission in general; to be equipped to pursue the truth by growing in knowledge and fellowship with one another.

Initially, Mr. DeAlto entered the Pusch Ridge family originally as the GS Physical Education teacher and became involved as a HS track coach. Two years later, he had the chance to fill in for the cross country coach for a week, which led to him permanently taking up the position full time. Mr. DeAlto also considered teaching at the Upper school, and when asked regarding his preferred topic to teach, he said Bible, since it was a passionate subject that he had always enjoyed teaching. Sure enough, after patiently waiting in a transitory phase and weighing various career-based decisions, an opportunity opened up for a Bible Teacher at the Upper School, which Mr. DeAlto gladly accepted, and where he has been teaching for the past four years in addition to coaching cross country with fellow coach and teacher Daniel Kenneston.

Mr. DeAlto’s first year teaching in the Bible Department was challenging, as a number of changes occurred in his personal life; however, the longer he has taught at PRCA, the more he has observed a sense of stronger bonding and connections with the other teachers. “The change I have seen is a stronger sense of community among teachers, closer friends among each other, which I think definitely overflows into our relationship with students in a very healthy way. I have seen more openness and availability for people to speak their minds.” He emphasizes that the general atmosphere of the school, both in the classroom and out on the track has a sense of community between the entire student and staff body.

The joy of being in a community with others that makes teachers, coaches, and students feel comfortable is an outstanding display of the surroundings in the school day, but is expedited further when it comes to the exhilarating feeling running brings to Mr. DeAlto and so many others. He describes running as  “such a primal, freeing thing...I can just step foot outside and just go, and it is so freeing to know I am not bound by anything, I can just run in the dirt, in the street, on the sidewalk...and so that’s what I have always loved about our sport, running in general, is just this sense of freedom.” He also relates these moments when he is running, alone or with the team, as a true connection with God, seeing growth over the years when he observes how our bodies have been engineered. Running is working out in the most natural way, no equipment necessary, “just you and movement,” he remarks.

But it’s not just about the physical aspect; running parallels Scripture too. Countless occurrences in the Bible portray the endurance, perseverance, and grit required to live a lifestyle of faith in Christ, which can be better understood when used metaphorically in terms of running a 5k, the standard cross country course distance. Faith, like running, takes both determination and trust in God to finish. Cross country is a sport among many others at Pusch Ridge that centralizes God at the heart of whatever appeals to the students in all grades  alike, allowing a coalition of interests, but also essentials, in all activities provided at Pusch Ridge.

Being a cross country runner is more complex than at face value. It has its drawbacks, like the sweltering heat that is present in the majority of the season, and the occasional misconceptions of the overarching system by which the sport operates. However, among these things are plentiful pros, mainly concerning the development of friendly competition which ultimately gives way to established friendship during practices and races. “Even though you are competing for first place, second place, etc., you are still ultimately trying to finish together, which I think brings a strong sense of camaraderie in cross country that I don't see in other sports” describes Mr. Dealto on the subject of themes he has noticed in the time he has coached. Another positive about Cross Country is the co-ed factor and the cooperation between every runner, regardless of skill level, provides a greater community as a unified, diversified body more so than other sports. Mr. DeAlto has drawn  the extensive community to events like the Flagstaff Meet and to the Midnight Mile, a team fundraiser that anyone can participate in each year. While many of these events could not be scheduled this year because of the COVID-19 pandemic, teams and coaches have maintained a cheerful outlook in the duration of each race and moment spent as a group.

Mr. DeAlto relates statements from the PRCA mission to athletics, where the expectation is to draw students closer to Christ in discipleship, which ultimately comes from community. To anyone not comfortable joining cross country on the basis of difficulty or commitment, Mr. DeAlto advises that people should join for the comradeship, and that the winning comes later, but is secondary to being a part of something bigger, which is what is the most important aspect of the season. He noted the satisfaction expressed by graduating students when they were a part of the team, rather than not including themselves, which resulted in greater gratitude for many on the team who completed the season feeling resolved. Charles, why are you adding this quote? Are you wanting to encourage students to try cross country? Mr. DiAlto says, “Ultimately I would ask [the reader] just to consider what it's like to be a part of a group of people, to identify with the way God designed us to live.” Mr. DeAlto, like many other leaders at Pusch Ridge, values and encourages others to be connected to something, preferably cross country, but genuinely anything that complements the lifestyle God has called us to live. PRCA recognizes that connecting with others is vital to living a God-called lifestyle, and therefore provides opportunities like cross country to foster these connections.
Back
Grammar School (grades DK-5)
6450 N. Camino Miraval, Tucson AZ 85718
Phone: 520.529.7080
School office hours: 7:45 AM - 3:30 PM

"The mission of Pusch Ridge Christian Academy is to teach our students to become like Christ through a classical Christian education within a covenantal community."

“All for Christ and His Kingdom”